The rain was coming down as we got ready to leave. We knew it was coming but had this little tiny bit of hope it would wait until later in the day or stop for awhile. Neither of these hopes happened it was  coming down and it showed no signs of letting up. Aware that it was going to be a wet walk to the Dental Office in Los Algodones Tom put our rain ponchos in the Jeep and I grabbed our umbrellas and we were off. Any other day I would have personally welcomed the rain. It really was not that cold and walking in the desert watching the small washes fill up, is in my opinion, not a bad way to spend an afternoon. Yes, I would have gotten wet but the only place I would be going is back to the motorhome and I can easily get dry. Today knowing we had several blocks to walk in the rain and would be wet when we got to the Dental Office and wet again when we got back to the parking lot was not something we were looking forward to.

Just as we reached Ogilby Road we received a phone call from the dental office offering us a ride from the border to the office which we gratefully accepted. So we called once we were ready to start walking from the parking lot and we were picked up at the Purple Pharmacy.  After Tom's appointment he offered us a ride back but the rain had let up quite a bit and we had our umbrellas so we decided to walk. Walking under the vendors roofs we were able to stay dry and avoid most of the puddles. Back at the border we walked to the end of the line. Luckily we were under a cover most of the time and the rain stopped while we were in line. Yes, for those of you that experienced the rain here on Monday and have been to Los Algodones, the parking lot was full even with the rain and there was a line.

We took a drive over to Yuma, I had two packages to mail and we needed a couple of groceries. Heading back to Ogilby Road just after we went through the California check point we could see the rain ahead. So we arrived back in the rain.

It was not fun making the trip to the dentist in the rain, Tom does not think it was fun period.  He needed to have the tooth pulled and we wanted to have some time between when it was done and when we leave this weekend to make sure he does not have any issues with it. So we got a little damp but we did not melt.

We did not see a sunset today just the light leaving the day.

The wind woke us up this morning before the sun joined the day. Hearing the topper on the living room slide there was not doubt it needed to be brought in quickly.

It was extremely windy out this morning and going outside to take pictures of the sunrise was not going to happen. The pictures below were taken through the front windshield of the Stinger "B" it is not real clean and hopefully I removed most of those spots. 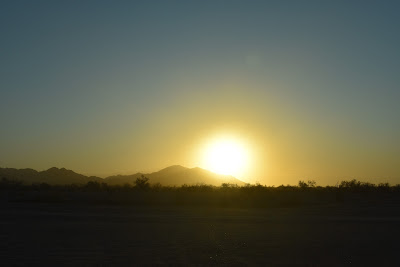 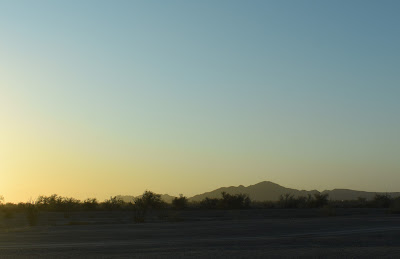 It has been a lazy day spent mostly inside out of the wind. Tom took a nap between the tooth being pulled and the antibiotics he just felt tired. We have everything we need and we are parked in a beautiful place so sitting the next couple of days until he feels better will not be a bad thing at all. In fact I would say it will be quite nice to do just that.


We are so glad you stopped by!
If  you have time to leave a comment we would enjoy hearing from you.