As I sit here writing this I can see our flag blowing in the breeze. We are grateful for those who gave their lives so Tom can put that flag out and I can see it waving. 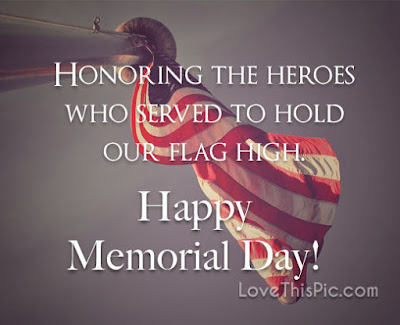 We are still hanging in there after enjoying a few days visiting with our grandchildren. On Wednesday, the 17th, we headed back to Mackinaw City to pick up three of our grandchildren. The sky was a lovely blue with wonderful white clouds. We had thought we were going to have them from Tuesday through Saturday but it only ended up being a couple of days. Our daughter-in-law, Nadine, was at the house Friday afternoon, I think she had a harder time being separated from them then they did being away. (Though they did ask where mommy was a couple of times and the little girl asked about her daddy.) They headed back downstate and home Saturday morning.

For dessert Thursday night my daughter melted chocolate and let them dip and spread it on marshmallows, strawberries and creme-puffs.(She is brave and they loved it.) 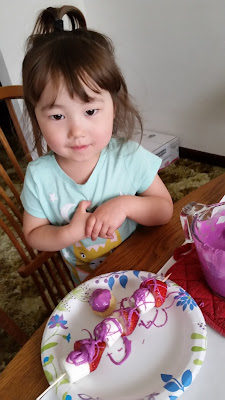 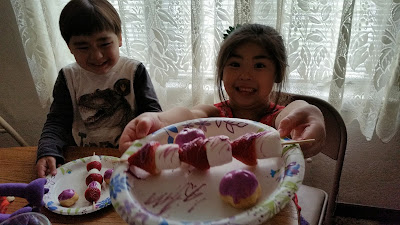 So it was a busy and noisy couple of days but at the same time it was fun to have them all here under one roof. (Making memories is what it is all about.) Of course, if the weather would have co-operated and they could have been outside more and it would have been easier on them and the adults. Since, except for one chair, our living room furniture is gone they did have extra room to play in.

In between the rain Tom has been out doing yard work and I have been taking care of errands. Today I had my hair fixed, it needed major help. Tomorrow I will be upstairs going through stuff. Packing what needs to go into storage, boxing what I want each of the our kids to have, and putting stuff aside for them to go through. Wish me luck. I am hoping to be finally done by next Wednesday. 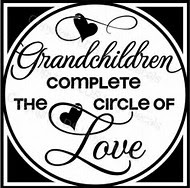 Hope the sun is shining where you are and you are enjoying your days. If you have a minute to leave a comment we would enjoy hearing from you.

(I know I am publishing this a day late but the wishes are still sincere.)

Both of our Moms are gone but thought of, missed, and loved every day.

Also, hope our daughter, Rachel and daughter-in-law, Nadine had a special Mother's Day! We are so proud of both of you and grateful for the wonderful job you are doing raising our grandchildren.

Plus, we hope our sisters, Cheryl and Chris and sister-in-laws, Linda and Jody had a Happy Mother's Day.

To all the mom's out there and woman who take care of children on a daily bases thank you and a belated... 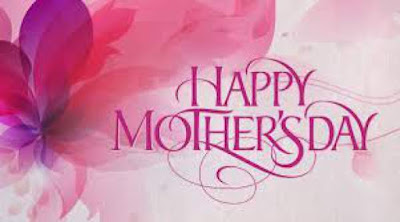 I know I have been gone from "blogging" for a bit but I have a good reason. We just got back from spending time with our children and grandchildren that live down by Detroit. We had a wonderful time but it was also a tiring time. There is a reason you have children when you are younger...mainly you have way more energy. So all our energy was focused on the grandchildren and that was about all I could handle.
Now we are back in Escanaba and we just finished two days of our granddaughter's dance recital. In a few days the three that live downstate will be here to visit for a couple of days while there mother goes to a conference and their father works then has his National Guard weekend. Since, the cousins will want to spend time together and their aunt will want to see them that means we will pretty much have 6 children here, 6, 5, 4, 2, 2, and 10 months, part of this coming week. It will be hectic but fun. 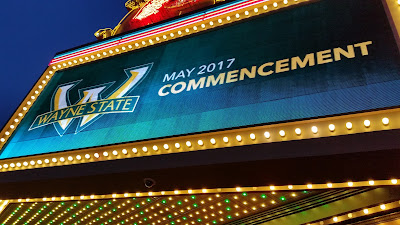 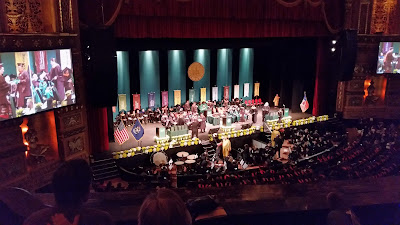 The Fox Theatre is a 1928 movie palace and performing arts center located at 2211 Woodward Avenue in downtown Detroit, Michigan, near Grand Circus Park. It was listed on the National Register of Historic Places in 1985 and was designated a National Historic Landmark in 1989.

Our daughter makes sure each girl, in not only her daughter's class, but in all the little ones classes, have their name and picture on their chair. Most of them cannot read and this way they know where to put their stuff for two days. She also, takes the time to put their letter and number on the chair to make it easier for all the other mothers, like herself, volunteering to watch and get them out on stage.


We spent Mother's Day with Rachel and her family. We were treated to brunch by her boyfriend, Timothy, out at the Casino which was a very nice surprise.


So that is a quick overview of our last 12 days. It has been busy and in between we have done a couple of things here at the house. Today and tomorrow we are getting things ready for our three grandchildren whom we will be picking up in Mackinaw City. Then this coming Saturday and Sunday we will be just sitting and catching our breaths before we dig in again to get things done.


Hope everyone is enjoying their days and getting a chance to relax.
If you have a moment to leave a comment we would enjoy reading what you have to say.

Where We Live in the UP

It has been a somewhat busy week trying to get things done. We are moving ahead but slowly.
Below is a picture of a lovely large maple tree in our backyard. It actually has small buds and when the leaves come out it will be very full. I remember when my dad planted this tree many, many years ago. (We purchased this house from my parents in 1994. My father had a stroke a few years earlier and the upkeep and yard were becoming to much for him. They had other buyers but the deal fell through and we needed a larger house and so we put in an offer and they accepted.)

I found the article below on the internet about the last ore boat. Tom remembers when he was serving on his first ship in the Navy and the guys would not believe we had boats this size and larger coming into port in Escanaba. If they were this large why would they be called boats. The answer because they only sailed on the great lakes. (He ended up having his dad send him and article about the ore boats so he could prove that he was telling the truth.) 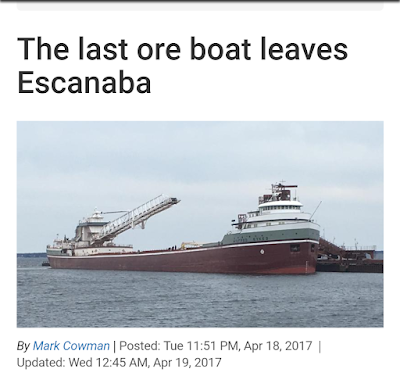 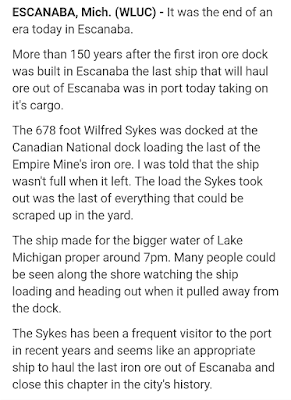 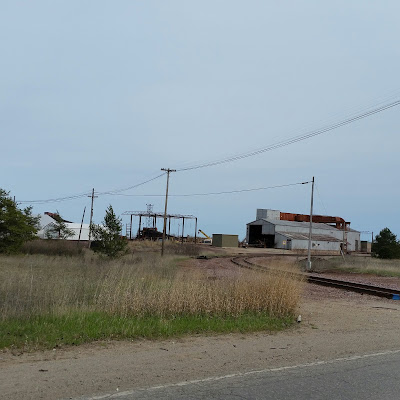 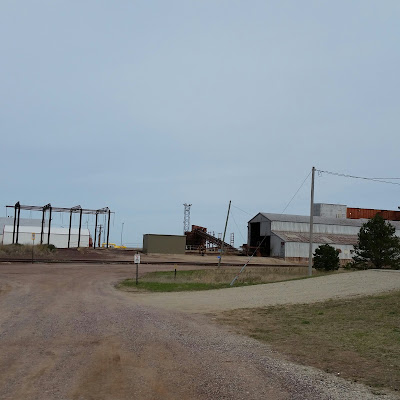 I found the picture below, and the one below it, on the internet. It was a described as a post card from the 1950's. This is what the Ore Docks looked like while I was growing up. You can see the ore train above.
My grandfather worked on these ore docks. 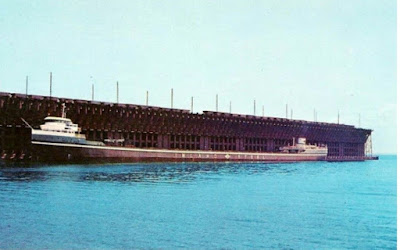 We started the day by going to mass at St. Joseph and St. Patrick's church. We do not belong to this parish but they have the last mass on Sunday at 11:30AM and we were slow getting ready this morning. (We did belong to this parish for a couple of years and it is where our daughter made her First Communion.) 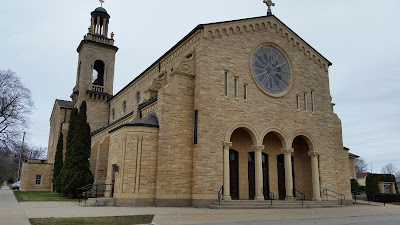 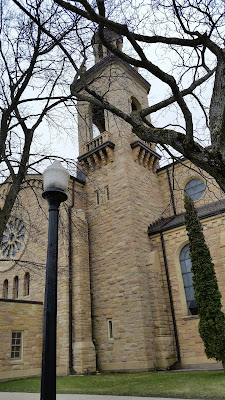 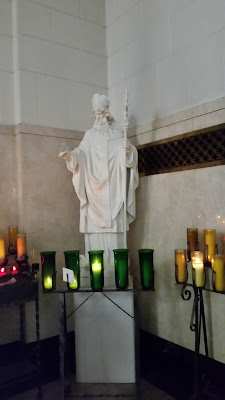 The building below was once St. Patrick's Catholic Church and when it closed it was stripped of its stain glass windows, altar, and statues. It is sad to see this once beautiful church building in such disrepair. (This is the parish Tom grew up in, baptized, 1st Communion, and Confirmation. His sister and her husband were also married here.) I was able to find out that 11 of the 13 windows are at St. Peter the Apostle Catholic Church in Lemoore, CA. Which opened in 2013 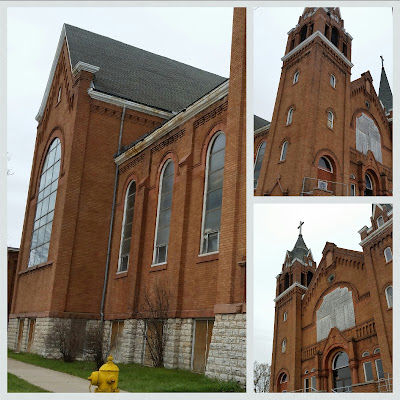 An interesting side note:  In 1901 the Irish members of St. Joseph Church begin to circulate a petition to form their own parish after disparaging remarks are made about them by the assistant pastor, Father Hubert Kalt, O.F.M., on St. Patrick’s Day.  The petition is presented to Bishop Frederick Eis on July 14 and a vote to separate from St. Joseph Church is taken.  On July 26 Father John M. Langan is appointed first pastor of St. Patrick Church and the formal division is declared by Bishop Eis.

The building below: Originally the auditorium and gymnasium for St. Joseph Church, the building for the William Bonifas Fine Arts Center dates back to 1938. The fine arts center is named for "Big Bill" Bonifas, who immigrated from Luxembourg to the Upper Peninsula in the 1880s and became a wealthy lumber baron. The William Bonifas Fine Arts Center (Click here for more information.)hosts cultural activities and educational programs. They put on activities throughout the year. When our children were in grade school they went to art classes here. Our son sang in one of the cabarets when he was in 8th grade. They also bring in the Missoula Players in the summer and both our children participated in these children plays.
I went to St. Thomas Catholic Grade School and this is where our 7th & 8th Grade basketball games were held. At the time there were 5 Catholic Grade Schools, 1st through 8th grade, in the area. 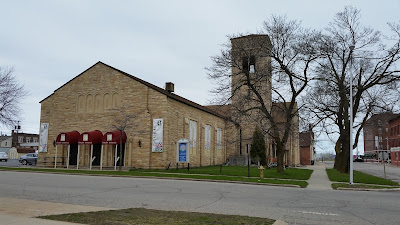 (The information about the two churches and the library I found under the History of Escanaba and St. Joseph and St. Patrick's Parish.)

Later in the afternoon Charlotte, our granddaughter, and I went to see "Beauty and the Beast" then Pizza Hut for dinner. She is 5 and very much like her mother so there was a lot of talking. She told me she liked the cartoon version better and I would have to agree with her. 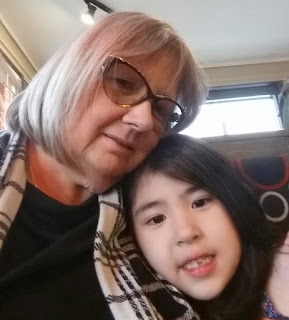 Today's highlight was having my brother stop over for a visit on his way home from work. We had a nice visit and then showed off the Stinger B.

The sun made an appearance a couple hours before it set and I took this picture of it setting from our front porch. It was 47 degrees today and the predictors are saying 53 degrees for a high tomorrow. Just having the sun and blue skies was wonderful. 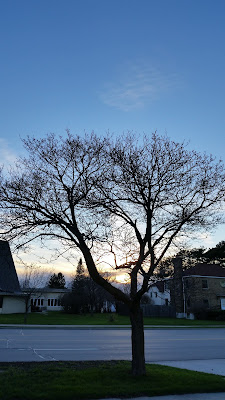 We opened the shades this morning to blue skies and sunshine and our temperature reached the low 50's. Tom took the opportunity to get the leaves out of the flower beds along our fence. I brought more of our stuff in from the Stinger B and packed. It truly was a beautiful spring day in our part of the UP.

Our daughter and her three children joined us for dinner this evening. Since, we will be gone for a week it was nice to spend time with them.

I have to admit we, mostly I, did not get everything done we planned on but we are moving forward slow but sure. This morning we are headed downstate to spend time with our son, daughter-in-law and grandchildren and we are so looking forward to seeing them. 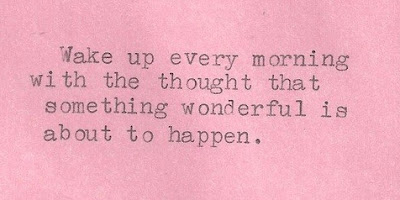 Hope you are seeing blue skies and sunshine.
If you have a minute, we love it when you take the time to leave a comment.