After lunch today we headed over to Buckeye  and Walmart. I ran in to pick up a few things and Tom sat out in the truck, the real purpose of our trip, paying bills. Though we have WiFi here at the park it is an open one and we do not like to use it when doing any banking. Unfortunately, for us, our personal hotspot is spotty in the park, to put it nicely, so off to Buckeye we went. We were about to head back home, when Tom finished, and then decided to head over to Five Guy’s for dinner. So in the end not a bad day our bills are paid and we had money left to have hamburgers.

(Note to self: if you are using Google Maps and “Matilda”, that is what we named the voice, tells you to take a certain exit listen. She may be trying to take you around a traffic jam. To verify the exit we needed to take I had checked the directions and then “Matilda”  changed her mind and said to take a different exit. I shut her off and we kept going into what soon became crawling traffic due to two accidents. Luckily are exit was the next one but a couple hours later after we had finished shopping and ate dinner the traffic was still crawling heading East on I 10.)

Our Little Corner of the World

The day was one of those do nothing in particular special days. As we sat outside in the sun watching the end of the day arrive I took the following pictures. (Though I did have to get up and walk around a couple of times to do so.)

Then the sun dropped behind the mountains along with the temperature and it was time to move inside. Soon darkness will descend upon our little corner of the world and we will end another special day.

“This happiness consisted of nothing else but the harmony of the few things around me with my own existence, a feeling of contentment
and well-being that needed no changes and no intensification.”
~Herman Hesse

It is Monday in Tonopah, AZ


It has been a beautiful clear day and now the sun is setting. I am sitting at our table, as I start to write this post, looking out the window I can see the sun hitting the tops of the mountains towards the north and the sky is turning a light pink along the edges of the horizon all around us. I love this time of the day when everything takes on a soft glow. The noise of the day seems to quiet down. Even the birds’ chirping seems softer.

Now to step back in time, a few days, to do some “blog catching up”.

We took a drive over to Quartzsite, La Posa South LTVA to be more exact, to attend the 2nd Annual Bloggerfest, a casual gathering of bloggers.

After we gathered our chairs in somewhat of a circle George, who I believe was the main organizer of this event, started the day by introducing himself and his wife Suzie then telling us a little bit about who they are. (Fulltimers from Ontario, Canada with the blog Our Awesome Travels) He then asked everyone else to take the time to do the same. The rest of our time together was spent chatting and getting to know a little about each other. It was a fun, interesting time putting faces to and talking with people whose blogs Tom and I have read.

I did take a few pictures at the beginning but then I started talking with people and the thought of taking pictures did not enter into my thought process again.

If you would like to see more pictures just click here, Our Awesome Travels or here, Travel With Bayfield Bunch.

At the beginning of this post I mention how I loved the softness of the end of the day.

I also find it special to watch the sunrise and the day awaken. Everything seems to come quickly into bright crystal clearness and the sounds of the birds chirping is loud and clear.

Here at this RV park we do not have a view of the sunrise, to many RV’s between us and the eastern sky. One thing that I find really beautiful, is watching the sun dance in the palm trees as it climbs in the sky. It looks to me like little lights twinkling between the palms.


I cannot believe it has been almost two weeks since I wrote a post. What is it about time that as we get older it seems to pick up speed. My mother mentioned it more then once over the years but I never really understood what she meant until our children began having children and Tom retired. When our children were really little, before they started school, time seemed a lot slower and I believe because we were a little older when we became parents we did savor the moments. Then they started school and it seemed like some days needed more hours especially when the activity list was filled to the brim. It was as though we blinked and they were graduating. Now though time is simply flying.

I know we enjoyed a couple of happy hours, took a ride by the nuclear generating plant (I wanted a closer view of the steam that generates the white fluffy clouds we occasionally see building then floating by.), did some wine tasting, I enjoyed a pedicure, Tom had his hair cut, and we did some shopping for a few groceries. Took a ride to explore the area nearby and get a closer look at Saddle Mountain. Of course, there has been cleaning, cooking, and doing laundry. I have participated in a couple of the craft classes offered here and spent some time crocheting. Tom checked out their rock shop and is thinking of going and trying his hand at some rock polishing. We have watched a few sunsets and Tom enjoyed a Black Jack Casino Night over in the game room.

This retirement "snowbirding" thing is really fun when you just sit back and enjoy the "ride". We have found it is important to just let the days unfold. I am not to saying we do not make some plans because we do. What I am saying is we do not stress if they do not work out as planned. We have decided it is not about seeing this and doing that it is more important to enjoy the moments and what will be will be.

So below I am adding pictures with captions from the last couple of weeks. 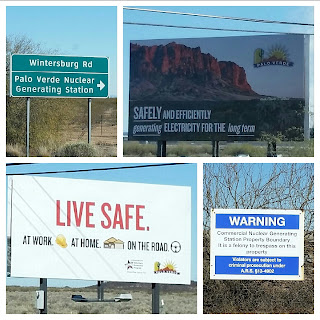 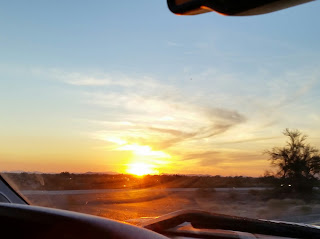 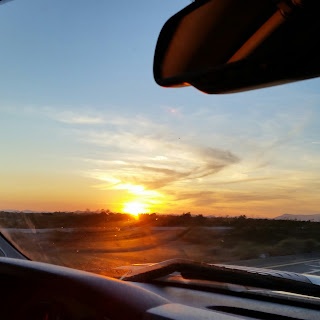 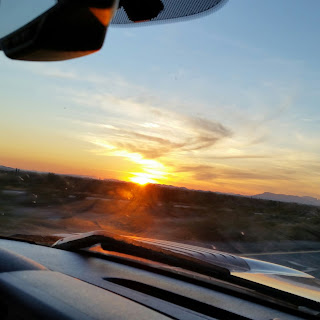 January 16th we had dinner at the Saddle Mountain Brewing Company. Also, did some beer tasting which Tom definitely enjoyed and watched the Packers/Cardinals' game which he did not enjoy the end of. The food was good and except for the end of the game it was a nice evening. (For some reason I never think to take pictures when we go out to eat.) 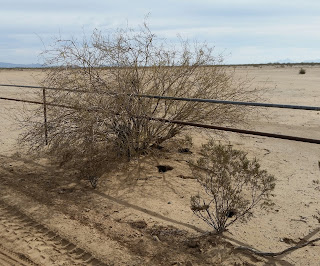 I was interested in what the black rocks we could see when riding by the mountains in the area are. So I did some research and this is what I found out.

About 40 miles (65 km.) west of Phoenix to the south of Interstate 10 at Tonopah are a pair of volcanic mountains linked by a saddle of lower hills. The more dramatic western peak is Saddle Mountain. It is composed of lighter-colored lava, tuff and rhyolite. The eastern peaks are nearly black basaltic lava of Quaternary Age. The Bureau of Land Management controls the major portions but there are a number of private holdings surrounding the mountains and there are quite a few mining claims (none of which appear to be active). 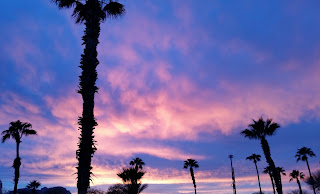 "If we are ever to enjoy life, now is the time,
not tomorrow or next year  ...Today should always
be our most wonderful day."
~Thomas Dreier