We started the day like most with coffee and just enjoying the morning. We had a plan to meet with the others around 3:30 to head in to Silly Al's for an earlier dinner; so we were not in a hurry and just enjoying a lazy morning. Then we realized our friends, Rose and Art, were on their way and Patsy messaged us that Deb and Riley had stopped in for a surprise visit. So in a flash we were dressed and out the door. What a nice surprise to see Deb and Riley we knew they were not to far away and had hoped they would stop by. They are a mother, Deb and daughter, Riley from Ontario Canada who live full time in their 5th wheel they affectionately call the Igloo. Deb's blog, On a long and lonesome highway..., is always filled with beautiful words and pictures of their travels.

It was certainly nice to see Rose and Art this year. Last year between all of us not feeling well and other commitments it never happened. We had a short visit and we got to show off the Stinger "B". Before they left we made tentative plans to get together at least one more time before we head east. They have a new place they need to show off and we are looking forward to seeing it.

We walked out of Silly Al's right around 5:00PM took a minute to say good bye to George and Rose with hugs all around. It was certainly nice meeting them and we hope we will cross paths again in the future.

Back home it was still warm enough to sit outside so we decided to make an adult beverage and do just that. Stepping out I noticed Kim sitting outside and asked if they were having Happy Hour when she said yes I asked if they would like to meet in the middle. We moved our chairs and in no time the whole group was in the circle. It was a lovely night with no wind as we chatted and watched the sun set on our day. 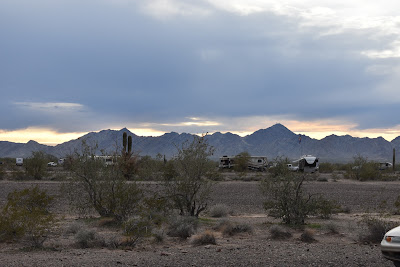 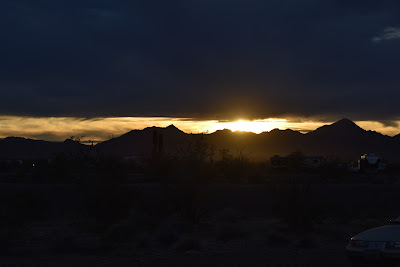 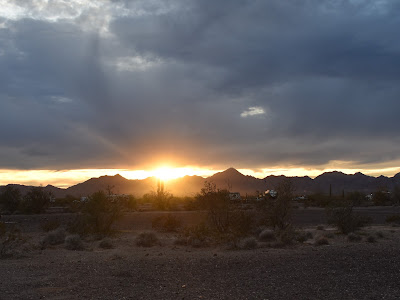 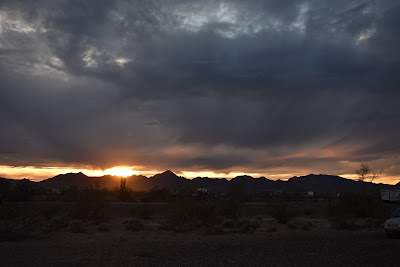 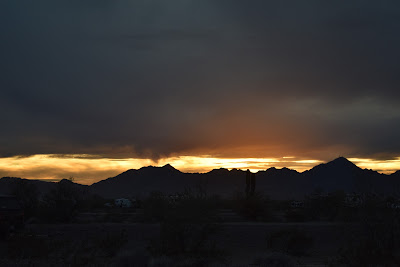 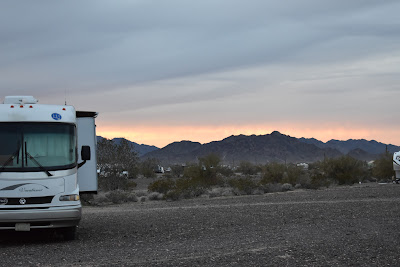 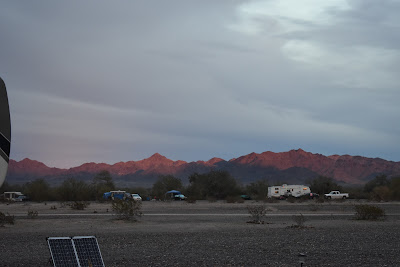 Not long after the above picture everyone except Kim and Ken along with Tom and I headed back in for the evening. We sat there a while longer, die hearts that we were, extending our Happy Hour with some more wonderful conversation until the chill of the evening chased us into our homes. It was a nice evening and we enjoyed every minute.

Up before the sunrise this morning I had made up my mind to get dressed and take a walk then when I looked out the clouds were in the East and I easily changed my mind. Tom made the coffee and while we spent time enjoying it  I read blogs and shared with him what everyone is up to. Then I decided to stick to my idea of a morning walk. So I got ready and did just that. I mentioned the idea to Tom but he was busy getting everything together to send in for the license plate renewals for the Stinger "B" and Jeep but he did promise bacon and eggs when I returned. A promise he did keep. 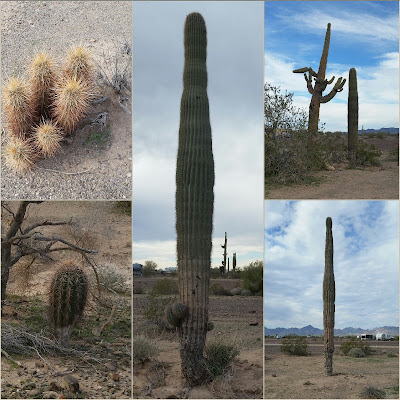 I was a little nervous at first and looked towards the 5th wheel he came from and of course there was no one in sight. He came up gave my a couple of sniffs and that was it. He never barked and just danced around me as I took the picture and did not follow when I turned to walk away. Just the same it made me uncomfortable because you just never know.  I was far enough away from the rig and did not invade their area. The dog, in my opinion, should have been tethered, enclosed, or the owners should have been out there.

After brunch Tom headed in to put gas in the Jeep. We are thinking about going for a ride tomorrow. Plus he stopped to fill the water bladder to add to our fresh water tank.

Around 3 o'clock Tom noticed Ken was sitting in the middle so he brought our chairs and drinks out and joined him. I was talking to our son and by the time I got there everyone but Suzie and George had joined them. George and Suzie joined us a little later after spending the day having some things taken care of on their motor home. (We found out later Ken had been out there since 2:30 we are definitely going to have to be more aware in the future.) During Happy Hour this afternoon a woman, I believe she said her name was Cheryl, from Prince Edward Island and her dog, Duchess, walked up to introduce herself and say hello. As always the conversations at Happy Hour are lively and she certainly added to the conversation. She and her husband are parked a little south and east of us. 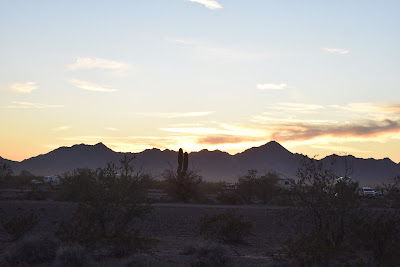 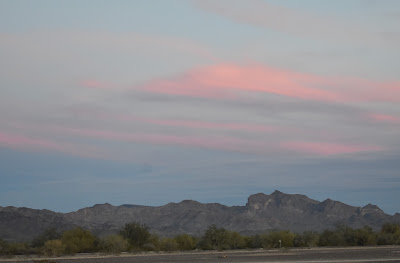 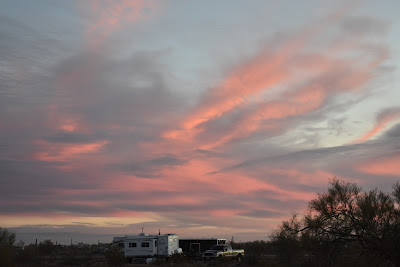 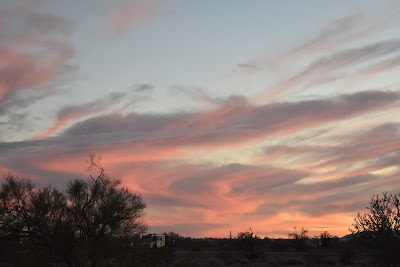 Not long after this Happy Hour broke up. After coming in and realizing we were both hungry but no one wanted to cook dinner tonight we decided to take a ride into Quartzsite. Our destination was Carl's Jr for a hamburger. 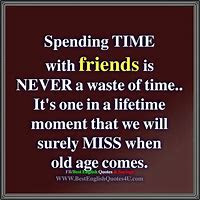 It was two enjoyable days. Two friends, Rose and Art, we had not seen in awhile stopped on Monday, plus, we had a surprise visit from two more, Deb and Riley. Afterwards we went out to Silly Al's for pizza with the group we have been parked by out here at LaPosa South.

Tuesday was a fairly quiet enjoyable day for us. Well except for the issue we are having with AT&T but that will resolve itself eventually. Even if means changing carriers. As the saying goes time will tell. Both days ended with a circle in the middle for Happy Hour as we chatted and watched the sunset, Not a bad way to spend our days.


We are glad you took the time to stop by and visit.
If you have time to leave a comment we would enjoy hearing from you.

Many mornings out here in the desert the light from the sun before it rises above the mountains puts on a lovely color show. It is always worth sitting and watching. The pictures below are of that sort of a morning. We were up and driving towards Parker this morning for Mass, breakfast, groceries, and to do a couple of batches of wash. So most of the pictures are taken out the side window of the Jeep. 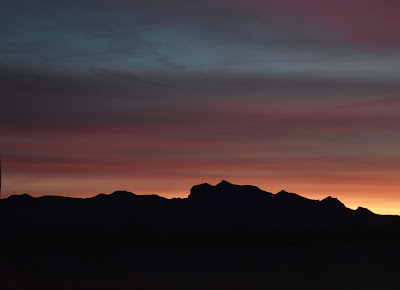 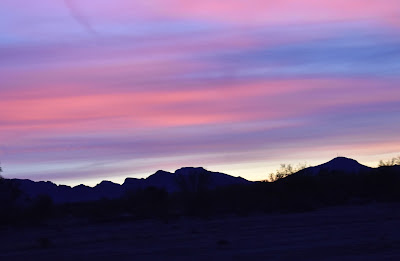 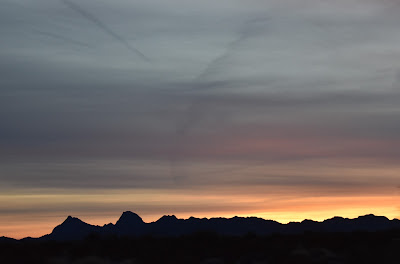 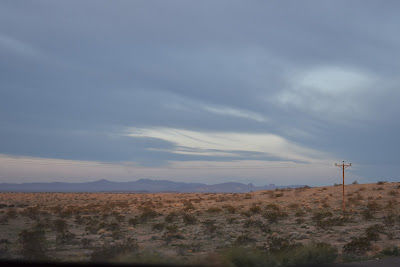 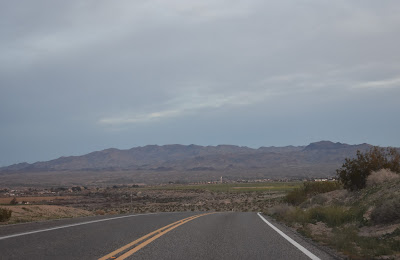 From what I read on the blogs, Our Awesome Travels and Chillin' with Patsy, two of our neighbors, it was a lovely sit out and enjoy the day type of day. I was thinking as we were finishing up today's errands we were missing doing just that but there will be more to come. They both also posted some nice pictures of our Happy Hour which we are happy to say was at our patio today.

After spending time sitting and enjoying a lovely Happy Hour, with the friends parked around us, we continued to sit out and watch the sunset. Tonight's dinner was brats and salad and since neither of us felt in a rush to eat we enjoyed the evening until the last of the light. 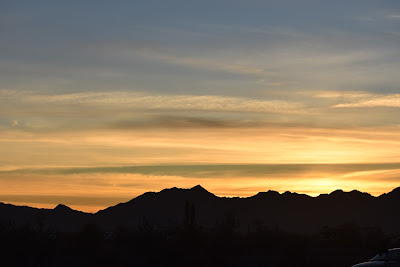 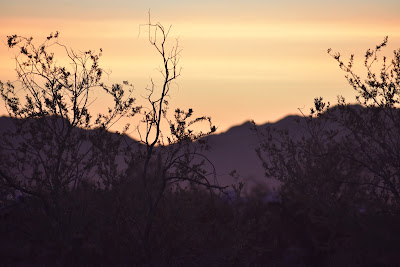 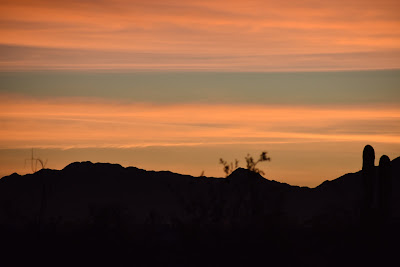 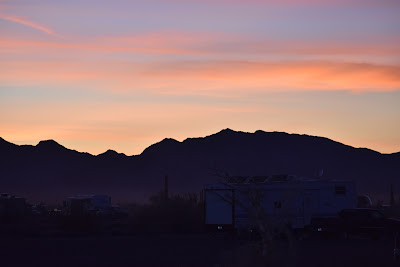 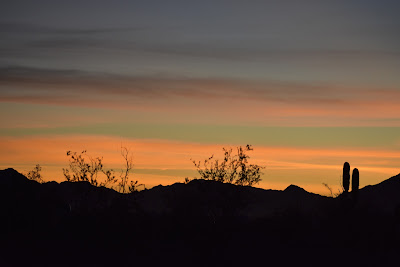 After writing the title for today's post this song sprung into my thoughts and would not let go so I end today's blog with its lyrics.


When did she get to be a beauty?
When did he grow to be so tall?
Wasn't it yesterday
When they were small?


What words of wisdom can I give them?
How can I help to ease their way?
Now they must learn from one another
Day by day


They look so natural together
Just like two newlyweds should be
Is there a canopy in store for me?


It was a day spent doing things we enjoy and a couple of things that needed to be done.
Yet, we would say it was a good day.
How can a day when tiny green buds, that promise beautiful tiny green leaves,
on a Ocotillo are discovered not be a wonderful day?

We are glad you stopped in to visit.
If you have time to leave a comment we would enjoy hearing from you.
Have a wonderful day!