Friends Stop By, A Sunset, and Pictures of Our Remodel

I stood outside for a bit watching the sun come up on our Sunday. It was a little chilly at 45 degrees but the sky was a beautiful blue and watching the desert slowly come alive is worth the cold hands, at least for a bit,...😊...but only for a bit then I retreated back inside where Tom had hot coffee ready. 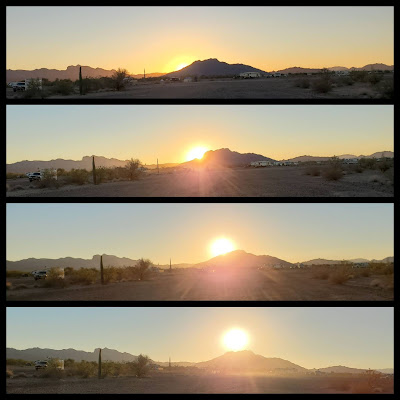 We had a nice surprise this afternoon when fellow Yooper's, Cathy and Shane, stopped by for a short visit. They had come into Quartzsite to get some groceries and we are glad stopping to see us was part of their list of things to do today. 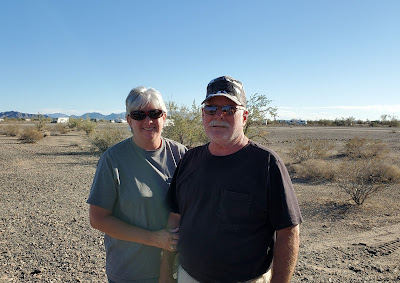 I remembered and they nicely agreed
to having their picture taken. 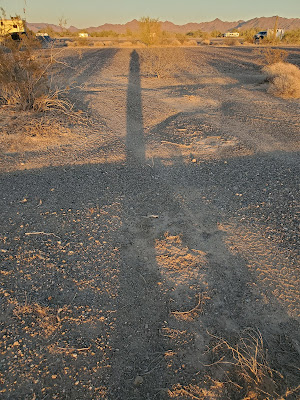 Not long after they left  I walked out
from our site to take a sunset picture.
I look so tall...lol 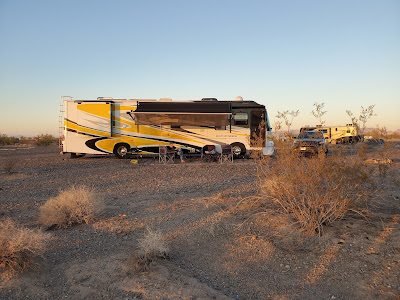 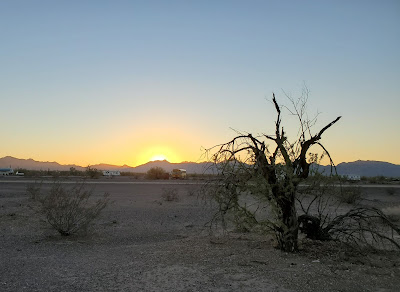 The sun going down on what was a good day
here at our site in LaPosa South.

Changes Inside of the Stinger "B"

As I mentioned when we were in Indiana last April the plan was to come back in the fall and have some changes made to the inside of the Stinger "B" which is what we did. There is still more to be done as we need to find two captain chairs and the front curtain needs to be replaced. (Though it looks like we have found a place to get the new curtains.) Plus we are waiting on a estimate to replace the valances which will be done in the spring.

These are pictures of what we have had done so far.  I included the following information so we have it for future reference.

We had all the carpeting replace on September 20th at Classic Boat & RV Carpet in Harrison Twp, MI. We were able to park next to the shop with electricity.

On October 3rd we arrived at Wood Design RV in Nappanee Indiana for the install of our desk/dinette area which began early on the morning of the 4th. They had a place for us to park with an electric hookup.

On October 6th we moved over to Lehman's Solid Surface for the install of our new countertop, sink and stove top. We parked here with no hook ups.

We moved to Comfort Design by Lambright in Topeka, IN on the 7th and our sofa and chair were installed the next morning. Parked overnight with no hook ups.

On Monday, 11th,  we went back to Lehman's Solid Surface to have a backsplash installed which we decided on after the counter was installed. This only took a few hours. 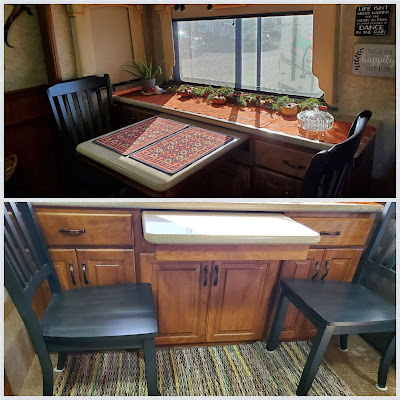 I am thrilled with this piece. They did a wonderful job of
matching the design and color of our cupboards.
The table does have a fold down leg in the front for
when we would add in the leaf. 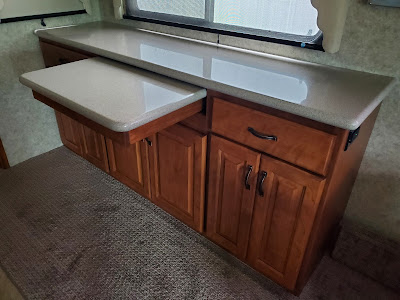 Just after they finished the install. 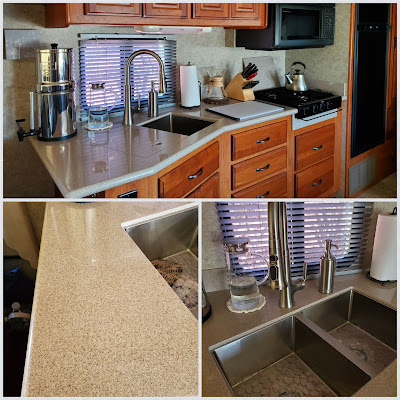 I am so happy with this countertop. They added 4 inches extra
counter past the sink and it has really made a difference.
The sink Mr. Lehman found for us is deep and wonderful.
Plus, there are sink covers to add counter space when needed. 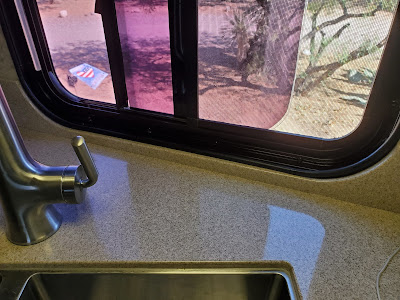 The backsplash across the back is one piece and we were
impressed by the job the young man did around the window. 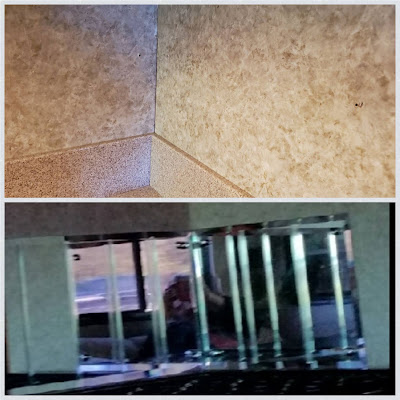 This was a really pleasant surprise.
Bottom picture is blurry but there were mirrors surrounding the stove top. The young man who took them down did not have much hope that the wall behind would be in good condition. Honestly we did not either; we all thought they were glued and screwed to the wall. As you can see in the top picture we lucked out; what he found out was there was a total of eight screws holding them to the wall and no glue. Now four of those screw holes are hidden by the backsplash. Still contemplating what we will do around the stove but there will definitely not be any mirrors. 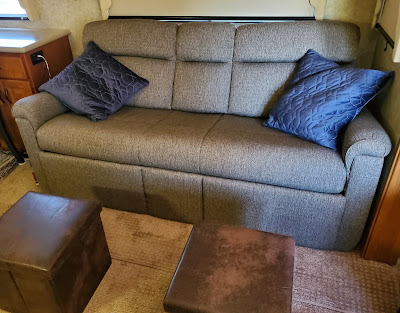 Our couch and recliner. These were made at the place were
we picked them up and had them installed. 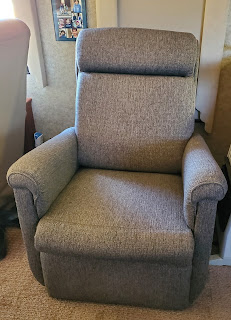 I wish I would have thought about the valances when we where there in April ordering the desk/dinette area. I did not think about it until we removed the old booth and couch which is what they matched. We are both very happy with what we have had done inside our home, which we lovingly call the Stinger "B", so far. 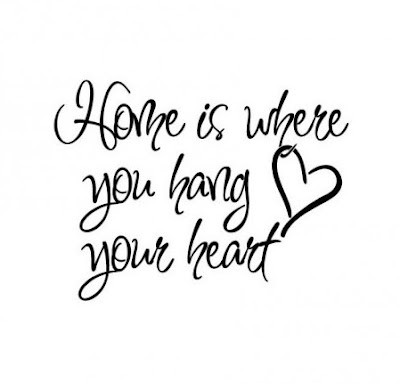 We are glad you took the time to stop by!
If you have time to leave a comment we would enjoy hearing from you.
Posted by Tom and Deb at 8:42 AM